Nearly 800 people attended the Uvira conference, some from the war zone just to the north. More photographs 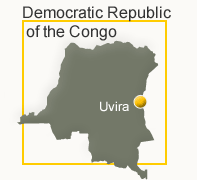 A war close at hand, difficult financial straits, the need to travel long distances under unsafe conditions, and blazingly hot weather did not stop 776 people from attending the Regional Conference in Uvira, a city on the eastern edge of the Democratic Republic of the Congo in the heart of Africa.

Most came from the DRC itself, but 13 people were able to make it from Burundi and four from Rwanda for the event, held on 15-16 November – the third of 18 consecutive weekends of Baha’i conferences around the world.

“It almost felt like the heat of the joy and enthusiasm of the participants was competing with the burning heat of the African sun,” said one participant. “Even before the conference was over, the friends were expressing their determination to inflame their clusters – and those of their neighbors – with their vision and their activities.”

“Although all our belongings were taken from us on the way here, we made it to the conference.”

For some of the people, the insecurity of the region seemed to add to their determination.

“Although all our belongings were taken from us on the way here, we made it to the conference,” said Francois Njiangani of Maniema Province, DRC. “I am now planning to start a core activity that is going to be a way out, a help for the whole of humanity.”

Ngoy Kalonda came from North Kivu – which with its capital of Goma is a site of the current war – and said she too felt that Baha’i core activities offer hope.

“The enthusiasm created in this conference will help us to remove the difficulties in our clusters,” she said.

Through songs and dances, the participants showed their understanding of the objectives and demands of the Five Year Plan.

“After having traveled 305 kilometers by foot, I am full of joy to be here and to be able to attend this conference, and see the representatives of the Universal House of Justice.”

“Everybody is called to enter the institute process. Arise and serve!” sang a group of joyful children.

The purpose of the conferences – there will be 41 in total, nine of them in Africa, in the space of four months – is for Baha’is to celebrate their community-building activities of the last two-and-a-half years, and to consult about upcoming goals.

The gatherings start with a plenary session, then divide into workshops to study messages from the Universal House of Justice, including a letter sent especially for the participants of each particular conference. On the second day, people again divide into workshops, this time to discuss how they can work together to achieve goals for specific clusters.

Mrs. Rachel Ndegwa, a member of the International Teaching Center, attended the conference as the representative of the Universal House of Justice.

A security officer of the locality who had been unfamiliar with the Baha’i teachings came to some of the sessions and afterwards commented that the conference was organized “at the right time, in the right place.”

DRC, Burundi, and Rwanda are in the midst of violent conflicts, yet Baha’is from the three countries assembled to create unity and peace. The officer said if Baha’is are able to put into practice what they say and spread their message in all continents, the world will be transformed.

Twenty-one people from North Kivu province managed to get to the conference, despite the war. The gathering originally had been scheduled to take place in Bukavu, near North Kivu, but was moved south to Uvira because of security concerns.

Uvira, practically on the equator, is a city of unpaved streets (one is tarred) on Lake Tanganyika, which borders Burundi. To get from place to place, most people walk, although quite a few ride bicycles.

The main language of the gathering was French.

The Uvira conference was the first of two planned for the Democratic Republic of the Congo. The second one will be on 22-23 November in Lubumbashi, at the southern tip of the country.

(Compiled from reports from the Counselor and other participants)

“After having traveled 305 kilometers by foot, I am full of joy to be here and to be able to attend this conference, and see the representatives of the Universal House of Justice who came to give us a boost in the activities of the Five Year Plan. We are going to try our best to become an A cluster.” – Mr. Akili Tambwe (Kilebecha C cluster, Lulenge, DRC)

“This conference brought me joy, new teachings from the Universal House of Justice and gave me new vision. Now we need to go back home and encourage each other to increase our capacities so that we can bring our cluster to become an A cluster.” – Miss Bizoza Noela (Bujumbura B cluster, Burundi)

“This conference has been a confirmation of our teaching work. Our focus should be on looking for the receptive souls.” – Mr. Mutuyimana Jilbert (Bugarama C cluster, Rwanda)

“Being at this conference has been very fruitful, not only because we came to listen to the message of the Universal House of Justice, but also because now, we have been encouraged to continue the core activities for the progress of the nations.” – Mrs. Kashindi Lubachu (Basimukindji A cluster, South Kivu, DRC)

“To be able to come and listen to the messages of the Universal House of Justice makes me very happy. This conference is a confirmation of the undoubted victory of the Faith.” – Mr. Georges Ruhimbasa (Kisangani A cluster, Eastern Province, DRC)