The 4,000 people at the Toronto gathering make it one of the largest conferences of the 27 held to date. More photographs
and video 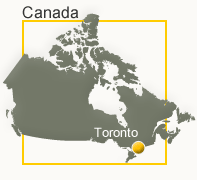 The Toronto conference welcomed over 4,000 participants despite frigid temperatures of minus 20 C that delayed travel for some and in fact may have prevented a number of others from arriving. Representatives from all over eastern Canada, including Nunavut, were joined by Baha'is from Bermuda. The venue was the Toronto Congress Centre.

The gathering opened with prayers in a northern aboriginal language, French and English, one sung by a colorfully dressed choral group. "Let the religions agree, and make the nations one," the words said.

The representatives of the Universal House of Justice were Ms. Uransaikhan Baatar and Mr. Stephen Birkland, both members of the International Teaching Center. In his opening talk, Mr. Birkland stressed the importance of not being distracted and dismayed by the situation of the world as well as the importance of taking action despite feelings of inadequacy. A representative of the National Spiritual Assembly of Canada then made a presentation about recent activities and what has been learned.

“The evening was truly uplifting and purposeful, as both the skits and musical presentations were expressions of the country's experiences in the teaching field.”

In breakout groups, the participants studied messages from the Universal House of Justice and deepened their understanding of the elements required to sustain growth. Participants expressed gratitude that the gathering allowed them to experience a larger Baha'i community and understand better the vision of the House of Justice.

People shared experiences of core activities in their communities. In a workshop for junior youth, the young participants expressed the desire to explain better to their friends what the Baha'i Faith is, and to be able to answer the questions of their peers.

By the time the afternoon plenary began, the snow began to fall and a white blanket soon covered the city. Ms. Baatar's address focused on the importance of the Institute as an engine of growth, and how crucial it is to continually raise capacity in order to sustain activities. She encouraged participants to choose one path of service as a focus.

After the talk, there were stories from the region to inspire participants and illustrate key points of learning. One repeating theme was how communities are able to help each other, and that this is a pattern worth emulating. Another point was that understanding of the core activities and their impact on society is something that evolves over time.

A man from Toronto described how he had participated in Baha’i study circles and later joined the Baha’i community. Noting that Baha’u’llah teaches that the essence of faith is fewness of words and abundance of deeds, he said he had become deeply involved in service activities in his neighborhood.

“I knew about the activities but did not know what it was supposed to look like all together. Now I see it's an organic process.“

Two participants from Montreal gave a presentation, in both English and French, demonstrating how they teach children a prayer in French that begins with the words “O God, guide me.”

Laughter filled the auditorium by late evening as the Saturday cultural program unfolded. Small skits were interspersed among the musical presentations, illustrating scenes of people overcoming feelings of inadequacy that prevent them from participating in activities. From a man on a treadmill trying to talk to his gym buddy, to a grandmother who taught a children’s class despite feeling that the "youth should do it,” the skits obviously resonated with the audience.

Baha’is from each province offered a musical presentation, with many children and young people taking to the stage. Prayers sung at firesides and songs written for regional institute campaigns were among the segments. The audience was eager to participate, and the conference even had a theme song that was sung in French, English and Persian.

“The evening was truly uplifting and purposeful, as both the skits and musical presentations were expressions of the country's experiences in the teaching field,” one participant said later.

Sunday morning's devotions heightened the sense of mission as portions of the Bab's Tablet addressed to the Letters of the Living were read in English and French. The feeling of urgency continued throughout the morning with a presentation from Continental Counselor Dan Scott noting that Baha'is are not content with the world as it is and must strive to understand the need for true religion. "The needs for today are too great to be weighed down by the burden of inaction," he said.

A group of youth from Montreal led the conference in singing a prayer before the assemblage divided again into workshop sessions, this time into 36 groups to plan future activities in specific communities. Afterwards, it was announced that nine communities would establish intensive programs of growth by April, an increase from the six that had originally been planned. Some 50 people offered to move to these communities to help with the activities.

As the conference closed, the group sang together one last time. People then slowly began to file out of the flower-adorned hall, some with their families, some with dear friends, and all uplifted by the spirit of the conference and filled with longing to meet the goals they had set for themselves.

Andreanna Bigonnesse, 20, Sherbrooke, Quebec: “It really gave the vision we needed for our community.”

Kadi Togola, 24, London, Ontario: “Today in the workshop discussions, I didn't say anything in my group, but in my head I was thinking I want to start a devotional.”

Tina Saleh, 14, Niagara Falls, Ontario: “I feel really special because the Universal House of Justice is acknowledging all the work that the youth has done. I think I'm going to have more energy, more confidence in teaching methods and say more prayers.”

Faizi Vejdani, Regina, Saskatchewan: “The skits helped because we saw people getting over their awkwardness and fears, and it helped us to recognize them in ourselves.”

Catherine Bigonnesse, 23, Sherbooke, Quebec: “I knew about the activities but did not know what it was supposed to look like all together. Now I see it's an organic process. “

Nancy Flynn, Grimsby, Ontario: “I was so touched by the Universal House of Justice sending two representatives all the way to us. I just hope so much that the Baha'is can seize this opportunity.”

Madhavi Gundloori, Toronto: “Believing in the Bahá’í Faith has changed my whole life as well as my outlook on life.”