Participants at Stamford came from nine states in the northeastern U.S. More photographs 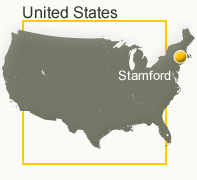 Nearly 2,000 Baha’is from the northeastern United States gathered in Stamford, Connecticut – just outside New York City – to celebrate recent achievements in their community-building efforts and to gain a better perspective of future work.

Over two days, participants first heard speakers describe the functioning of core activities at the neighborhood level, then consulted among themselves as to how best to accelerate their work.

The conference was one of six held in the United States as part of an overall series of 41 gatherings being held around the world at the call of the Universal House of Justice. This was the seventh week of 18 consecutive weeks of conferences, scheduled to conclude on 1 March 2009.

Representing the House of Justice in Stamford were Stephen Hall and Rachel Ndegwa, both members of the International Teaching Center. The two helped describe how the core activities – study circles, children’s classes, activities for young teenagers, and devotional meetings – are part of a bigger plan to lay the building blocks of a new civilization.

“The speakers presented the familiar elements - the core activities - in a new light; as organic, developing facets of a new civilization.”

Growth was a main theme of the conference.

“The purpose of growth is to establish a world civilization, affected by the message of Bahá'u'lláh,” said Sophie Clark, who recently joined the Bahá’í community after attending a study circle using the first book in the Ruhi Institute curriculum. “Whether the message is being (spread) by Bahá’ís or non-Bahá’ís, that is secondary.”

Reiko Power of Newark, New Jersey, suggested that the process is analogous to that of the circulatory system of the human body. She said Bahá’ís are like red blood cells going around and getting oxygen and taking the “breath of life” around the body of society.

She told a story about how one young man was attracted to the teachings of the Bahá’í Faith in her community and then brought along four friends to activities soon after he became a Bahá’í himself..

“So that way, four other red blood cells have been drawn into the stream with him,” said Ms. Power, describing how the process of outreach has a multiplier effect.

Mrs. Ndegwa explained how the Ruhi Institute study books encourage people to initiate acts of service and reach out to the society around them. Almost anyone can get involved, she stressed.

The rate of people joining the Baha’i community in the region has increased dramatically over the last two years, said Bruce Grover, a member of the Regional Council of the Bahá’ís of the Northeast.

After spending Saturday trying to better understand how this global process of outreach can work, Bahá’ís at the Stamford conference spent Sunday in workshops and small gatherings working out the nuts-and-bolts of how they can take it back to their local communities.

“Now we are in the position of exploring what we’ve heard repeatedly – that we are building a new world civilization,” said Hooshmand Sheshbaradaran of Hoboken, New Jersey. “You will no longer see a devotional meeting as just an end in itself. A devotional meeting becomes a moment in this process….”

Among those attending the conference were members of the Continental Board of Counselors, the National Spiritual Assembly of the Baha’is of the United States, and the Regional Council of the Northeastern States.

Salim Afshar, 30, Boston: “At this meeting it feels as though we are parts of the body, slowly becoming aware of our functions as parts of a whole. We are all offering our individual efforts, and the Universal House of Justice keeps bringing us back to the big picture.”

Artemus Stover, 35, New York: “For me, this meeting is grounding the community in the lived experience of the intensive programs of growth – it allows everyone gathered here, no matter their experience up to this point, to see the fruits that have come from the efforts in our region so far.”

Elijah Bliss, Maine: “It has given me a focused look on the quality of service that we're doing.”

Scott Walters, New York: “Essentially what happened at the conference was that the speakers presented the familiar elements - the core activities - in a new light; as organic, developing facets of a new civilization which we all, under the guidance of the House of Justice, were already laying. We just need to step up the pace and widen the scope a bit.”