People of all ages consult during a workshop session. More photographs 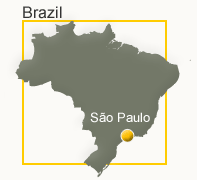 The Sao Paulo regional conference, like many of the earlier gatherings in the current series of 41, was one of superlatives. Held in the largest city in South America, at one of the biggest hotels in Brazil, it was the largest Baha’i gathering ever held in this country.

The night before the conference opened, the excitement built as bus after bus, van after van, pulled up to the hotel to deliver Baha’is eager to celebrate achievements, consult about future plans, and greet friends both old and new.

In all, 1,700 people arrived, most from Brazil, but 55 came from Uruguay and 85 from Paraguay, including some that traveled overland. Brazil itself is an immense country – the fifth largest in the world in both area and population – and some of the people who came by bus from the far north had been in transit for 60 hours by the time they reached Sao Paulo.

From the opening prayers on Saturday to the final session on Sunday, the main conference room was filled to its capacity of 1,300, requiring the overflow crowd to watch proceedings via video hook-up from an auxiliary room.

“My biggest challenge is that I am extremely shy…. So now, what I do is, I invite people to my house, and also invite someone else from my cluster, and before I know it, I’m talking and teaching.”

The first speaker, Dr. Walker, touched on the twin processes at work in the world today – one of disintegration, which, although negative and often devastating, also serves to break down old barriers which have divided humanity; the other of integration and unification. Integration, she said, may not be “flashy” and may not even be noticeable at times because the building process is often unobtrusive and gradual. Still, she asked, “To what extent are we devoting our time, our hopes, our goals to the integrating process?” Each and every person, she said, can contribute to this building process.

During the morning, participants from each of the eight regions represented – six in Brazil as well as neighboring Paraguay and Uruguay – were asked to stand, and there were big ovations and celebrations all around.

At one point the conference was divided into 30 workshops, with hundreds of people moving to different areas of the hotel, following numbered flags, to study the messages of the House of Justice, one dated 20 October 2008 to the Baha’is of the world and one dated 20 December 2008 addressed specifically to the people gathered in Sao Paulo.

Mr. Mora offered inspiring comments, and the afternoon included presentations by nine people, most quite young, who talked of their experiences in organizing and expanding activities at the neighborhood level.

The activity that opened the evening session had everyone on their feet, holding blue sheets of paper and eventually making a flower together – that was all it took to bring down the house with cheering and hugging.

“This is the largest group of Baha’is I’ve ever seen, and I wouldn’t miss this for anything.”

The rest of the evening was a cultural program with lights, drums, dancing and singing. Ten different groups presented their work and were encouraged by the spirit of the receptive crowd.

Counselor Jorge Guerreiro spoke in the morning and referred to sacrifice in the path of service as “rest and joy” rather than work. He described experiences of Baha’is initiating core activities, including one area where the initial efforts of two women who “accompanied” about 30 others in the work led, within eight months to a core group of 100 people now involved in an intensive program of growth.

Participants were then divided into 29 planning workshops, following flags again, where they looked at ways of increasing the tempo of their work and better serving the needs of their communities.

Afterwards, some of the groups gave presentations. Individuals from a cluster called Acaí in the far north of Brazil told how they have planned to work with their fellow residents to tap into the inherent capacity of neighborhoods, for example, by offering classes for the moral and spiritual education of children.

Joseli Barbosa Kaffashi, Tangara da Serra in Mato Grosso: “In our cluster, the children are heard, supported and encouraged. They are just as active as the adults.”

Maria Cristina Santos, city of Bahia: “My biggest challenge is that I am extremely shy…. So now, what I do is, I invite people to my house, and also invite someone else from my cluster, and before I know it, I’m talking and teaching.”

Sabino da Silva Oliveira, age 68, Belem: “This is the largest group of Baha’is I’ve ever seen, and I wouldn’t miss this for anything.”