The Quito participants give a rousing wave for the camera. More photographs 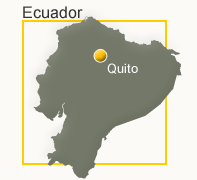 A woman’s voice intoning a supplication in the Quechua language was the opening prayer for the regional conference in Quito, Ecuador, which drew 1,150 believers from Ecuador, Peru, Colombia and Venezuela. Minutes earlier, the friends had crowded into the conference hall, with fond embraces and joyful faces imbuing the atmosphere with the characteristic warmth of the Latin American community.

The drawing power of the conference was evident. Stories of how people made it to Quito – overcoming barriers through sacrifice and sheer determination – were quietly circulating as travelers began arriving.

There was the 17-year-old woman who, upon learning that she wouldn’t be able to attend without a government ID document, persevered until she reached the governor of her region. He was so impressed by her diligence and desire to take part in the conference that he personally granted her the document.

There was a youth, the only Baha’i in his family, who so longed to attend that for several weeks he chanted a special prayer each day, supplicating Baha’u’llah for His help in seizing what the youth considered a rare opportunity. The young man made it to Quito – and also learned the prayer by heart.

“The spiritual atmosphere mixed with planning is creating an experience of a Baha’i conference like no one has ever seen.”

Among the most moving stories was that of the friends from the Guajira peninsula, the northern tip of South America that straddles Colombia and Venezuela. It is an arid, desertlike area, and most of the people are of the Wayuu indigenous group. As soon as they heard the call of the Universal House of Justice to attend the conference, they organized themselves into committees to make arrangements. A key committee was the one in charge of documents. Getting the required ID cards, passports, visas and yellow fever vaccinations in just a few short weeks was daunting – and in some cases, heartbreakingly impossible.

One youth from the Colombian side of the Guajira raised money by working as many odd jobs as he could find. He walked all the way to the nearest city to get his vaccination only to be told to return another day – which he did. But in the end he couldn’t travel to Ecuador because he was under-age and had to get written consent from his father, who lives in Venezuela and couldn’t be reached in time. The young man joyfully contributed his hard-earned cash – the equivalent of about US$8 – to help others make the trip.

Fourteen friends from the Guajira left their regional capital of Riohacha at 4 p.m. the Tuesday before the conference, but 13 hours later the bus they were on collided head-on with a truck, destroying the bus and killing the bus driver’s assistant. One of the Baha’is suffered a broken leg and couldn’t continue the long journey. All the passengers were taken to the closest hospital, and 13 of the Baha’is were able to continue their trip after getting patched up. The little money they had was spent in dealing with the accident, but no matter … they said they were determined to make it to the conference to which they had been invited by the Universal House of Justice.

The morning workshops were devoted to study of the 20 October letter and the new message from the House of Justice. The afternoon session focused on the different elements of the pattern of growth in a cluster. Discussions were enriched by the experiences recounted by friends from all the countries participating in the conference.

“Truly, the conference has been spectacular. I have lived for 60 years in the Baha’i community in Peru, and I have never been to such a marvelous event. ”

Martin Vega from Norte de Cordoba, Colombia, shared how, after having studied Book 1 of the Ruhi Institute sequence for only five days, he arose to serve as a tutor of a study circle himself. “Someone helped him, and now he gives back the ‘accompaniment,’ the love and the nurturing that were given to him,” commented a counselor.

Teresa de Jesus, from Piura, Peru, described how in a short period of time her cluster went from having only five tutors, two children’s classes, and one junior youth group, to being ready to launch an intensive program of growth. “We should not underestimate the power of a handful of tutors,” she concluded.

On Sunday, the conference focused on two key questions:

The participants divided themselves into workshop groups by region, and detailed plans were worked out on how to meet the challenge of achieving 20 clusters with intensive programs of growth by next Ridván.

All through the conference, many long-standing Baha’is commented that the gathering seemed unprecedented. As one counselor put it: “The spiritual atmosphere mixed with planning is creating an experience of a Baha’i conference like no one has ever seen.”

“I expect it is setting a standard for the future,” he added.

Geraldine Vanessa Harb Peralta, age 24, Barlovento, Venezuela: “You ask how the conference has helped me see my role in addressing the needs of society. It  definitely has helped in the sense of putting right at hand the tools that I need. It has clarified things that perhaps I knew, but now they are more ‘on the table,’ easier for me to reach.”

Carlos Chirinos, age 37, Caracas, Venezuela: “I think the conference has been very good. The organization was done very well. The workshops have been excellent….  I see that they have helped people understand that we have to work faster to achieve the goals.”

Manuel Rosas, age 43, Lima, Peru: “This is the first conference I have ever been to. I have been a Baha’i four or five years, and this has been marvelous – positive in every way. Many things that we had been learning are being clarified. We are getting a much clearer picture of what it is that we are doing.”

Gabriela Medina, age 21, Lima, Peru: “How was the conference? Great! Super good. I am going home motivated to begin my core activities and continue with the Plan. The logistics were very well organized, and I loved the workshops because I never expected that there would be representatives of the Universal House of Justice. Everyone at the workshops was very united.”

Jaime Til, 30, Otavalo, Ecuador: “When I get home, my personal plan is to start with one of the core activities to work toward the goal in our cluster, which is to launch an intensive program of growth. All the friends are going to help out in one way or another. My own plan is to start a study circle.”

Carol Til, age 35, Winay, Tungurahua, Ecuador: “The conference was an unforgettable experience. We have never had this kind of experience, to see so many people from so many countries.”

Belkis Paz, age 36, Rio Algo, Guajira, Colombia: “After a conference like this, one is motivated to do more, to sacrifice more, because we are reading the guidance from the World Center. This inspires us. Sometimes you get tired and feel like you have to rest, but with something like this, you get inspired again to sacrifice more, to make an effort to complete the Plan.”