Sharing experiences is a key feature of all the conferences. More photographs 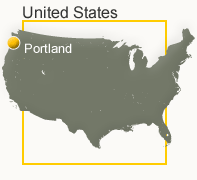 More than 2,600 people from the states of Colorado, Idaho, Montana, Oregon, Utah, Washington and Wyoming – and also from the Baha’i community of Alaska – gathered in Portland, Oregon, for one of the 41 conferences in the current four-month series.

The weekend of 6-7 December was the sixth of 18 consecutive weekends that will see conferences in cities around the globe. For many of the participants in Portland, it was the largest Baha’i gathering they had ever attended.

The conference opened with a prayer in memory of Counselor Rebequa Murphy by one of the students – now grown – from her children’s classes. Mrs. Murphy passed away unexpectedly just two weeks ago. “Counselor Murphy played a key role in planning this conference, and her memory brought a smile to our faces,” said one participant.

“The gathering started on a high note and continued to build throughout two glorious days, culminating in a universal outpouring of concrete commitment….”

The first day included reports from a number of Baha’is who shared personal experiences, including Lori Hendon of Benton County, Oregon, who commented on the importance of visiting the homes of friends and neighbors to share prayers and get to know people. “In this society, visiting and hospitality are underdeveloped,” she said. “We can’t build the new world order without relationships.”

One speaker referred to the rapid changes taking place in Baha’i communities around the globe as they work to respond to conditions in the world. “If you are feeling that things are going so fast you’re not sure what’s happening, you are not alone,” she noted.

She said that the various Baha’i core activities – children’s classes, activities for young adolescents, study circles, and devotional meetings – reinforce each other and help communities develop capacity to address their needs. “We have such riches – we need to share them with society,” the speaker said.

On Sunday, as in the other conferences, participants divided into workshops to discuss upcoming activities in their home areas. A number of the Baha’is from well-established communities offered to assist with endeavors in 19 priority areas, where the friends are striving to develop a higher level of Baha’i activity.

The Alaskans in attendance were enthusiastic and by the end of their own consultations in a workshop session felt that they could initiate intensive programs of growth by 2009. One speaker commented on the vast distances that people in Alaska travel, including one Baha’i who, for a year and a half, regularly made a 300-mile round-trip to tutor a study circle. It was also noted that some of the youth are becoming the most experienced members of the Alaskan Baha’i community.

After the conference, one participant summed it up this way: “The gathering started on a high note and continued to build throughout two glorious days, culminating in a universal outpouring of concrete commitment….”