Sixty-eight workshops were spread around the grounds of the House of Worship in New Delhi. More photographs
and video 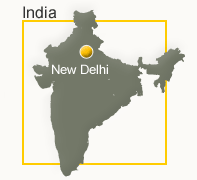 Over and over one hears the word “historic” when people refer to the 41 conferences convened by the Universal House of Justice. The New Delhi conference drew 2,800 participants – the most of the 10 conferences held so far – and the number that gathered for prayers inside the Baha’i House of Worship was the largest since the day the temple was inaugurated more than 20 years ago.

Even long-standing Baha’is struggled to find the right words to describe the experience. “I’ve never been to a conference of this size before,” said Sadhna Mitra of Bhopal. “I have been a Baha’i for many years, but I’ve never seen a gathering of 2,800 people. It feels that so many souls are getting into Baha’i and getting close to Baha’u’llah.”

And she continued: “We never get to see the ‘aerial’ view. We always were so close (to our own activities) that we didn’t understand that so much is happening. Coming here is seeing how much we have achieved, and I am here to celebrate.”

Hikmat Busunke, a new Baha’i who traveled all the way from Kathmandu, Nepal, was equally impressed: “I feel so good, so happy. I’m learning so many things. I have been a Baha’i for two months, not more than that, but all of these people are my family.”

“I have been a Baha’i for many years, but I’ve never seen a gathering of 2,800 people. It feels that so many souls are getting into Baha’i and getting close to Baha’u’llah.”

Participants from all over northern India were joined by 480 from Nepal, 120 from Pakistan, and 50 from Afghanistan. The main language of the conference was Hindi, with translation into Farsi for Afghan friends and English for some of the others. The conference was held on the lovely grounds of the House of Worship, adding tremendously to the spiritual atmosphere. Plenary sessions were in a huge tent, while the breakout sessions – 68 of them on the second day – were under smaller canopies, under trees, under “petals” of the House of Worship, and in the open air.

A representative of the National Spiritual Assembly of India began the conference with beautiful poems in Hindi depicting the spirit of the time and the tasks ahead. As representatives of the various countries came forward to share their achievements, the friends were especially moved by the spirit of gratitude and brotherhood exemplified by the Pakistani friends, an unlikely scene elsewhere in the society.

Dr. Ayman Rouhani and Ms. Uransaikhan Baatar attended as representatives of the Universal House of Justice. Dr. Rouhani delivered the opening address, which set the tone for the proceedings by focusing the participants on the guidance of the House of Justice. The importance of intensifying capacity-building efforts to match the accelerating process of disintegration in the world was stressed.

Comments by Dr. Rouhani and Ms. Baatar, both of whom are members of the International Teaching Center, addressed many points, including renewing the passion for the institute process and learning to accompany others. The experiences shared by friends from India, Nepal, and Pakistan provided a direct illustration of the points that had been emphasized earlier.

A gentleman from Uttar Pradesh spoke of how he helped a group of 20 people in a particular village study Ruhi Institute Books 1 to 6 within four months’ time. This had an energizing effect, and the level of Bahá’í activity in the village steadily grew.

A man from Delhi cluster recounted his experience of becoming a Bahá’í and explained how, with the help of others, he was able to establish Baha’i community life – complete with core activities and Nineteen Day Feasts – in his own neighborhood.

“I feel so good, so happy. I’m learning so many things. I have been a Baha’i for two months, not more than that, but all of these people are my family.”

The second day began with a beautiful devotional gathering at the House of Worship, followed later by a presentation by Counselor Praveen Mallik that used the image of a heavenly army – a talk that according to one listener instilled in people the “confidence that 46 intensive programs of growth are attainable if we just follow the guidance and use the appropriate strategies.”

People then broke into 68 planning groups which focused on different areas of India, Nepal, and Pakistan. The participants shared concrete plans to launch intensive programs of growth in the coming months – plans reinforced by testimonies of friends from the target clusters. Particularly moving was a story from a 17-year-old girl from Delhi about her intensive study of the institute courses and the transformation that both she and her neighborhood are experiencing.

A number of friends offered to serve as home-front pioneers or otherwise assist in establishing 47 intensive programs of growth by Ridvan 2009 or shortly thereafter, which added to the sense of confidence and joy that permeated the gathering. This led to a final session where, according to one description, “nearly 3,000 intoxicated lovers of Baha'u'llah were gathered.”

Moving songs and prayers were chanted, including a beautiful song about the life of Baha'u'llah composed by a young man from Uttar Pradesh who was inspired by his study of Ruhi Institute Book 4.

The final address used powerful quotations from the Writings and described an army of light – “a befitting closing for this historic gathering,” said one participant. “Many friends were now preparing to return back to fulfill the vision that they have gained, while others stayed till late enjoying the view of the Temple and the traditional Indian songs and dances.”

Mary Majumdar, Delhi, India: “I have only one word to say:  great!  Just great! … We have over 2,500 people here. When I think of entry by troops, I see this, and I think this is what entry by troops is all about. I can see it; I can feel it.”

Prava Baskota, Nepal: “I will go from here with lots of new lessons. I am out of Nepal, out of Kathmandu, for the first time. I don’t feel real. I look at the temple and it still feels like I am looking at a picture.”

Noreen Bomassy, Pakistan: “Seeing such a big crowd of Bahá’ís I feel really very strengthened, pleased, and confident…. The most exciting thing I’ve gotten here is the sense of the singularity of our aim.”

Mehrdad, Pakistan: “The highlight here is the coming together of diverse peoples, sitting under one roof, and thinking the same—the unity of thought of people. I am seeing this for the first time in my life. It’s the realization of what Bahá’u’lláh described:  the garden with different flowers.”

Niru, 21, Agra: “This is the power of the Baha'i Faith that we see here, where people from countries such as Pakistan, Nepal and India stand united together. They also shared with each other their unique experiences, and it was very nice to see how every one of them have the same aim of serving God with all their energies….”

Sanju Dutta, 24, New Delhi: “I hope the kind of power I'm feeling will always be in my heart like this.”