A cultural dance from Sarawak added to the festivities during the Saturday evening program. More photographs 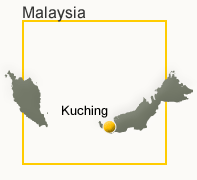 Some 1,320 registered participants attended the Kuching conference, and more than half were young adults and youth. Also noteworthy was the presence of 60 children, who had their own program, and a number of elderly individuals who were among the first Baha’is in Sarawak, one of two Malaysian states on the island of Borneo. The longtime Baha’is expressed their gratitude at being able to attend such a gathering and learn about the latest developments not only in their country but also in the region and the rest of the Baha’i world. Of course, they also were excited at meeting over a thousand Baha’is gathered under one roof.

Although the conference took place in Sarawak, over 100 people traveled in from close-by territories, including a number who had taken the 15-hour bus ride from Sabah.

For some of the travelers, their long trip became a mini-conference itself, enabling the friends to begin forging closer ties even before arriving in Kuching. Several people from the region who had been residing in Australia, Cambodia, Japan, Singapore, and the United States were also present.

It was the biggest Baha’i gathering ever held in Sarawak – and in the region as well – and spirits were high. One participant said the prevailing mood was one of “joyful spirituality and utmost serenity.”

The venue was an academic institution where the main hall accommodated about 1,100 people. A smaller lecture theater was added for the overflow, with a video link to the main room provided. The rainy season did not dampen the highly-spirited participants, who seemed oblivious of the dark, cloudy skies in Kuching.

Among the participants were Mrs. Zenaida Ramirez and Dr. Ayman Rouhani, members of the International Teaching Center who represented the Universal House of Justice. Also attending were four members of the Continental Board of Counselors, Mrs. Lee Lee Ludher, Mr. Foad Reyhani, Mr. Jaya Gopan Ramasamy, and Mr. George Soraya.

The conference began with uplifting devotions, with prayers said in different languages from the region, followed by opening remarks by the chairman of the Spiritual Assembly of Sarawak. A message of the Universal House of Justice to the conference was read in three languages.

The program included an address by Mrs. Ramirez and presentations of recent progress in Sabah and Sarawak.

For a breakout session, people divided into 43 smaller groups, 20 to 30 participants each, to study two messages from the Universal House of Justice.

Saturday evening saw a two-and-half-hour long cultural program, which helped to create a feeling of enthusiasm and energy among participants.

“This session received a lot of attention from the friends, and further uplifted everyone’s spirits,” commented one man. “Traditional dances, songs, and contemporary dance were performed by representatives of various countries.”

On the second day, Counselor Foad Reyhani made a powerful and compelling presentation on the challenges of the work required to fulfill the goals for future activity. He cited in detail the example of the Magpet cluster on the neighboring island of Mindanao, the Philippines, where core activities had been minimal until two young Baha’is moved to the area and worked with local friends to start children’s classes and devotional meetings. An intensive program of growth is now scheduled for the area starting in April.

Another workshop session provided participants with a chance for more direct consultation.

“These small-group sessions – action planning to establish intensive programs of growth – were one of the most exciting parts of the conference,” said one participant, noting that each group focused on a specific area.

The second day of the conference included an inspiring talk by Dr. Rouhani, and summaries on the results of the workshops.

During the weekend, a number of people shared experiences from their own lives or from their home community.

Two relatively new Baha’is, both women, recounted their own personal transformation as they participated in the training institute courses and began their paths of service; one as a teacher of a children’s class in her own neighborhood, the other as a tutor of study circles. Both of their husbands, in seeing their work and devotion, have gone on to become Bahai’s, and all four will soon finish the sequence of courses. The two teenage children of one of the couples have joined their parents in the study circles. Both women have already begun to accompany others in their respective clusters in reaching out to their friends and neighbors, offering classes to children, and inviting people to study circles.

Another story was of an intensive institute campaign in Sarawak, which last September offered training for 54 youth. Two of the young people returned to their own community and were able to help increase the number and intensity of core activities in the area. A similar pattern has been repeated in a further 11 communities, and 20 of the youth are now traveling to other areas, too.