The Johannesburg conference, with 1,150 participants, was the largest Baha’i gathering ever held in that country. More photographs
and video 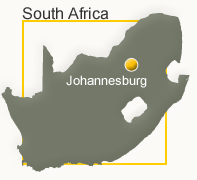 The conference in Johannesburg, South Africa, was exceptional. Organizers started out expecting a maximum of 850 people, but more than 1,000 came the first day and about 1,150 the second day – a good 300 over what they expected. In spite of running out of registration materials, the logistics committee persevered and managed to welcome, feed, and house everyone.

The spirit was extremely high, close to electrifying at times, with spontaneous singing and dancing breaking out in the large hall, particularly among the youth but also among the older believers. All were thrilled to be part of such a large gathering of Bahá’ís, apparently the largest ever to be held in the region.

The participation of young people was most heartening. The number of junior youth who were present, engaged, and taking part in workshops along with the older youth and adults was especially inspiring.

Mr. Stephen Birkland and Mrs. Joan Lincoln, members of the International Teaching Centre, represented the Universal House of Justice at the conference, and both addressed the gathering.

Mr. Birkland started with a delightful story about Ali Quli Khan as a young man falling into the service of ‘Abdu’l-Bahá as a translator and learning to do it through experience, much like the friends in their efforts to advance the work in their clusters. (See video clip on this page.)

Passages from the writings of the Guardian were then read, reminding the participants of the great heights of service to which we are all called in these critical times, no matter what our circumstances:

“The champion builders of Bahá'u'lláh's rising World Order must scale nobler heights of heroism as humanity plunges into greater depths of despair, degradation, dissension and distress. Let them forge ahead into the future serenely confident that the hour of their mightiest exertions and the supreme opportunity for their greatest exploits must coincide with the apocalyptic upheaval marking the lowest ebb in mankind's fast-declining fortunes.”

“Regarding your own condition: He strongly urges you not to dwell on yourself. Each one of us, if we look into our failures, is sure to feel unworthy and despondent, and this feeling only frustrates our constructive efforts and wastes time. The thing for us to focus on is the glory of the Cause and the Power of Bahá'u'lláh which can make of a mere drop a surging sea!”

The session ended with the following words of the Universal House of Justice: “…each individual, too, must make a conscious decision as to what he or she will do to serve the Plan, and as to how, where and when to do it. This determination enables the individual to check the progress of his actions and, if necessary, to modify the steps being taken. Becoming accustomed to such a procedure of systematic striving lends meaning and fulfillment to the life of any Bahá’í.”

Mrs. Lincoln’s presentation included a recap of the past 12 years and the development of institutes, clusters, core activities, and intensive programs of growth. She spoke about the rise in receptivity to the Faith that has accompanied the failure of the world’s systems and about the urgency and the responsibility for each of us to teach. We need, she said, a self-sustaining system to incorporate the numbers of new believers, and the training institute provides this.

“The conference played a big role in recharging my batteries and saying to me, ‘there’s work that needs to be done.’ And I’ll do it happily.”

The discipline and focused attention of the large gathering throughout all the talks and workshops were impressive indeed. Seeing over 1,100 people divided into 26 workshops on the second day, all in one enormous hall, was in itself exhilarating. In a disciplined manner, in less than 20 to 30 minutes, they were spread all over in groups of 30 to 50, hard at work, divided according to clusters that are to launch intensive programs of growth (IPGs) between now and July 2009. Although only 16 cluster workshop groups had originally been planned, after consultation with the Counsellors, they ended up with 26 that have a potential to launch IPGs. Pledges of all sorts, from prayer to funds, to home-front pioneers to travel teaching teams, accumulated as a result of the workshops.

Many younger Baha’is and new believers had never seen such a gathering, and they considered it an opportunity of a lifetime. Even older Baha’is walked into the immense hall and were overwhelmed. People were deeply moved, and the serious challenges ahead were clear to all. It was truly a conference of celebration and deliberation. Some said it reminded them of what they had heard about the spirit of the Ten Year Crusade, or the World Congress. And this was now their turn to respond similarly to the Universal House of Justice.

The vision of multiplying times 41 the spirit and dedication present in Johannesburg is a breathtaking one. Having their very own message from the Universal House of Justice to their regional conference thrilled the friends, and they are inspired to arise, to consecrate themselves, and to press forward.

(Based on reports from Counsellors and others at the conference)

“I have been a Baha’i a long time in Botswana – for many years – and have never seen what I’ve seen this weekend.”

“I’m going to work on the junior youth program that is already established in a nearby village, consolidate it and make sure that it grows”

“I learned a lot – what a spirit. I am greatly inspired.”

“Such an opportunity to exchange ideas – between A and B clusters, between countries and of course among all the friends. It shows us the greatness of our Faith.”

“We had two goal clusters but the friends were not confident. They wanted to know more about how to do it. All is now clearer for the friends. Even clusters that were not planning to launch IPGs soon have now understood better.”

“The vision is clearer, and I am enthusiastic to go home and teach. I have more confidence.”

“It’s an honor to be here, part of a dynamic and spiritual conference – an instrument for entry by troops. The spirit has been very high – it has been a transforming experience. We are not alone in our efforts. It has been: “I can! We will! I believe!”

“Now the friends can see … they are not alone. The different goal clusters were offered support, even for a week or two, which is very comforting. We had already made a plan for three months, but now the friends feel they can do more.”

“I feel so proud to be present here. They gave us perfect ideas about how to boost our clusters.”

“The conference has exposed our world community to our youth. It has been a once-in-a-lifetime experience. There is a sense of urgency now, and we have learned to be bolder in our planning.”

“Nine of us came. The nine of us are leaving, enflamed!”

“I came with Baha’is of three months, three weeks, and six months, who have now clearly understood and grasped the bigger picture of their new Faith. The willingness of these youth to serve is so impressive.”

“We had about seven days to get organized and come, and I was shocked to see such a massive (turnout). So impressive. Baha’u’llah is doing His work. We see so much despair, sickness, economic difficulties on a daily basis. But we come here and there was such excitement. These new believers are so confirmed in their faith.”

“These new Baha’i youth have taken on the framework of the Faith so fast. It was a momentous occasion – they have such confidence in the power of the process. It has been quite astounding.”

“This is Southern Africa's biggest conference yet. As one of the new believers from a recent IPG said, ‘You arrive in the morning and leave in the evening with 1000 new friends!’ We Africans have a habit of spontaneously breaking out in song when happy, and I can't even count how many times that happened.”

“Very exciting, very encouraging…. We’re learning a lot from other people’s experiences and learning how other clusters in other areas are advancing….  Seeing that is helping us in our own cluster see that it is possible to attain the goals that the House is asking us to attain.”

“The conference played a big role in recharging my batteries and saying to me, ‘there’s work that needs to be done.’ And I’ll do it happily.”

“Before the conference my mind was more set within Johannesburg as a cluster, and we always thought we have to get things done in Johannesburg. But since this conference I’ve had more of an outward-looking mindset, and I see now that according to what the House wants it is important for us to move out and to get to work on these other clusters which we have promised to them to become A clusters.”

“The contribution of all the different institutions was great. Things are smoother now, different.”

“The conference has helped me to understand myself, and showed me that I’m able to solve my own problems, to stay calm. There are things I can change and things I can not change, but I know that I can make a difference.”