The conference took place at the Messe Frankfurt complex, which bills itself as the world´s third largest trade fair venue. Photo shows only one of the halls used for the Baha’i gathering. More photographs
and video 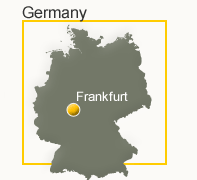 More than 4,600 people – double the number initially anticipated – gathered in Frankfurt for the largest ever Baha’i conference in Germany.

The event took place in the Congress Hall of the Messe Frankfurt complex, the world's third largest trade fair venue. As the preregistration numbers outgrew the original room that had been booked, planners added a second hall, then a third.

Almost 2,000 participants came from Germany, 800 from France, and 350 each from the Netherlands and Switzerland. Others came from Austria, Belgium, the Czech Republic, Hungary, Kosovo, Liechtenstein, Luxembourg, Macedonia, Poland, Serbia, and Slovakia.

Most of the 69 participants from Hungary traveled to Germany together on one bus, with Baha’is from Slovakia joining them at a stop in Vienna. Thirteen people from Kosovo were able to attend, with two Kosovan Albanians trying for weeks to get a visa and finally managing to do so one day before the conference started.

The purpose of the conference was to celebrate achievements in community-building activities and make plans for future work. The importance of every individual playing his or her part in a united effort to build a vibrant community life was stressed in opening remarks by the chair of the National Spiritual Assembly of the Baha’is of Germany, Dr. Hans-Martin Noltenius.

“When I look around at all these people, I really feel we are all pieces of one puzzle. Each of us has a reason to be here.”

“I like to compare us with the famous Berlin Philharmonic orchestra,” said Dr. Noltenius. “You'll find very young players, and some older ones – individual artists coming from totally different cultural backgrounds, playing totally different instruments. When they tune their instruments, the sound is horrible! But when they play together the music is wonderful, like a gift from God.”

The Universal House of Justice was represented at the conference by Mr. Stephen Birkland and Mrs. Joan Lincoln, both members of the International Teaching Center. Their presentations included reports from Baha’is relating personal experiences in initiating and sustaining activities at the local level – stories that helped demonstrate how capacities can be nurtured in people to contribute to the advancement of their communities.

In its message to the conference, the Universal House of Justice called upon the participants to press on in their countries with an “unflinching resolve and a joyful spirit, undeterred by the restrictive conventions of the society that surrounds you.”

Linking the Frankfurt conference with earlier gatherings in other cities, Mrs. Lincoln spoke of the sacrifices people had made to respond to the invitation of the Universal House of Justice to attend a conference. “What will you do with the message to this conference?” she asked. “Don't just file it away. Will you take this message and make more beautiful music, poetry and theater?”

“If we are confused about what to do with our lives,” Mr. Birkland remarked, “think about the idea of pressing on with a joyful spirit. We have to be happy. We cannot be distracted by the events of the world. The power to change the world is with us.”

Experiences from around the region

The conference heard from each country in turn, reviewing activities that are taking place throughout the region, particularly community prayer gatherings, study circles, children's classes, and junior youth programs. “We can do so much through these means,” said Angie Driesnack-Zendeh of Rostock-Gustrow, Germany. “We are giving the world much more than we think we are.”

Many of the conference participants were people who have only recently come into contact with the Baha’i community and joined the activities. Moise Alexis, a 23-year-old law student from Guadeloupe who now lives in France, told how he first heard of the Baha’i Faith when Baha’is visited his home and shared an introductory presentation.

“Coming to this conference was the second best decision of my life. The first was to join the Baha’i community eight months ago.”

He noted that when he had moved to the neighborhood where he now lives, he had found most the young people “on their own” and “fending for themselves.”

“I started to feel the need to be part of a project, to believe in something greater,” he said. Eventually he took part in educational courses organized by Baha’is and now enthusiastically serves young people in Creteil on the southeastern outskirts of Paris.

“Coming to this conference was the second best decision of my life,” said Mr Alexis. “The first was to join the Baha’i community eight months ago.”

Nura Samandari, 15, of Rheinland in Germany, talked about the challenge of starting classes for children in her neighborhood. “With a pounding heart I went out and invited my neighbors' children to take part,” she said. “Eventually, the children who came didn't want to go home and encouraged me to keep going.”

“I had the feeling that everyone can change the world if you want to do it and want to take the first step,” she said.

The conference proceedings were in English with simultaneous translation offered in German, French, Czech, Polish, and Hungarian.

Supplementary activities to the conference were planned at the Baha’i House of Worship 25 kilometers west of Frankfurt at Langenhain. The day before the conference opened, special transportation shuttled people from the Congress hall to the temple for four separate devotional programs. For many of the attendees, it was their first visit to the house of worship, and they represented one of the largest and most diverse groups ever to join there for prayers.

Another feature of the gathering were the references to 1958, when Frankfurt hosted another landmark conference – one of the intercontinental conferences held at the midway point of another Baha’i plan, the 10-year initiative launched in 1953 by Shoghi Effendi, the Guardian of the Baha’i Faith. Among the attendees at this year’s gathering were at least nine people who participated in the earlier event. They noted that in 1958, Baha’is from Iran were free to travel to such a gathering – at this conference, they were represented by red roses placed at the front of each of the auditoriums.

Cultural diversity was the hallmark of the two-hour program on Saturday evening which featured Tunisian-born singer Atef, choral versions of the Baha’i scriptures sung by the German choir Voices of Bahá, folk dances performed by eight young people studying at the Townshend International School in the Czech Republic, specially commissioned jazz settings of Baha’u’llah’s writings, and classical music performances that included an orchestra of young Baha’is in their teens.

A key feature of the second day comprised the workshops dedicated to the planning of activities in specific communities. Nearly 300 people offered to travel regularly – or even move – to communities other than their own, in order to help establish core activities.

The 273 children attending the conference attended their own devotional program at the house of worship on Sunday morning. Some of them recited prayers for the Baha’i children of Iran, many of whom face expulsion from school or other difficulties. The group released 250 helium-filled balloons from the temple grounds before returning to the conference to perform a song on the main stage.

Patricia Lippeck, Vienna, Austria: “When I look around at all these people, I really feel we are all pieces of one puzzle. Each of us has a reason to be here.”

Martina Donovalova, Bratislava, Slovakia: “We all have different skills. We have to help each other, accompany each other, work together.”

Christian Whyss-Yazdani, Reihen, Switzerland: “I love the principle of the unity of mankind. I want to support my Baha’i wife in her belief and actively support the Baha’i community because they're working for our spiritual well-being.”

Homayoun, age 14, Lyon cluster, France: “Seeing friends again and hearing about their experiences gave me a lot of energy. It's very important for me to go and share what I've learned here with my friends at home.”

Hartmut Grossmann, Finland: “The conference shows that unity of thought has developed in the worldwide Baha’i community. Hearing what is happening in other countries shows clearly that we all work together on the same goals and have a common vision. ...”

Anne Lemenager, Aix, France: “I'm a new Baha’i. Here, a whole new world has opened up to me.”