Baha’is from a 12-state region in the central United States participated in the Chicago conference. More photographs 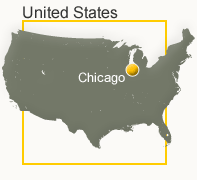 Confidence and enthusiasm created an empowering current that ran through the regional Bahá’í conference in greater Chicago, Illinois, the gathering place on a wintry weekend for some 2,340 participants from 12 states in the central part of the United States .

Like the other regional conferences, the first day allowed for a review of the accomplishments to date, while the second day provided time for the Bahá’ís to plan and consult together on the developments in their communities. An evening program at the midpoint of the conference brought musical styles as diverse as an American Indian drum song; a children’s chorus offering a memorized prayer; a rousing performance on African drums; lively, stirring singing with the Bahá’í House of Worship Choir; and more. Prayers, recited in English, Persian, Spanish, Lakota, Arabic, and Chinese, were interspersed with music in varied styles.

Deep roots have sustained the Bahá’í community of the U.S. Midwest, dating back to the visit of ‘Abdu’l-Bahá in 1912 and the laying of the cornerstone for the Bahá’í House of Worship in suburban Chicago.  Participants were eager to learn from each other’s experiences in their study of the Faith, their children’s classes, their work with youth, their devotional gatherings and their service to the wider communities in which they live.

“Just befriend, befriend. That’s what we’re all about.”

Their discussions were informed by the comments of the two representatives of the Universal House of Justice:  Dr. Penelope Walker, in her own words “a Midwesterner tried and true,” and Mr. Juan Francisco Mora. Both are members of the International Teaching Center. Dr. Walker helped put the work in the United States in a global perspective, pointing out how other countries are addressing some of the same conditions and challenges. Mr. Mora applied perspectives from the Bahá’í writings and from more than a decade of learning that has been gathered and shared by the International Teaching Center. Ms. Alison Milston, a member of the Continental Board of Counselors, set the stage for consultation by laying out the accomplishments and challenges of the region’s Bahá’í communities.

Reflections on the study of the 20 October 2008 letter from the Universal House of Justice led to discussions on developing a culture of learning. Several people shared stories of how such learning was helping them see their service to their communities in straightforward terms. Among them, Ms. Seowah Kahn, a young Navajo woman, told of her experience as a pioneer living on the Standing Rock Sioux Reservation in the Dakotas: “Just befriend, befriend. That’s what we’re all about.”

Mr. Hao Xu of Rolla, Missouri, described himself as “not a Bahá’í yet, not officially, but pretty close. At least now I believe in God. There are no atheists in the world; we just don’t know who we are,” he said. “We are just – and I just heard this word earlier today – yearning for meaning.”

“It was so nice to have such a spiritual focus for our marriage. We could be enjoying material happiness in the Bahamas but we would be broke. We would rather be here with the friends, hearing inspirational stories and making plans for our future.”

Deirdre Imagere, who spent her wedding weekend at the conference

There were 27 workshop groups dispersed throughout the conference space, assessing the state of Bahá’í activity in their areas, occasionally raising cheers when someone reported encouraging results, and analyzing needs that have yet to be met. Reports later that day showed that dozens of people had volunteered for the most crucial services:  to travel to assist with programs of growth, to tutor study circles, and even to move to a new locality to help with the sustained development of the community.

Eagerness to serve took on dimensions that had not been anticipated. One couple opted to get married in a brief early-morning ceremony in the snow-covered gardens of the Bahá’í House of Worship in nearby Wilmette – then rushed to attend the conference. “It was so nice to have such a spiritual focus for our marriage,” said new bride Deirdre Imagere. “We could be enjoying material happiness in the Bahamas but we would be broke. We would rather be here with the friends, hearing inspirational stories and making plans for our future.”

At the close of the Chicago conference, the participants had committed to implementing systematic programs of growth in more than 33 areas within the region in the next two and a half years.

(Based on reports from the staff of “The American Bahá’í”)

Samuel Alucho, age 30, Mentor, Ohio: “It’s been magnificent. All the speeches were not just inspirational but gave us a lot of ideas on how we can be more active, more helpful within the community. What stuck out in my mind was the urgency of everything….”

Leanne Jackson Butala, Apple Valley, Minnesota: “I’ve been walking on air since I got here! This conference has been really valuable to me in a lot of ways. Just to be able to respond to the call from the House of Justice I think has been important.”

Samareh Shahmohammadi, 18, Milwaukee, Wisconsin: “When you come to a conference like this or when you’re with the Baha'i friends, there’s a spirit that you feel, and I want to share that with my (other) friends. I want them to be a part of this.”

Andrew Hartin, 18, Minneapolis, Minnesota: “Something I find most useful that I learned at the conference was during the cultural presentation last night. We had all those different (communities) sharing the great ways they’ve found to teach the Faith through music. It was gorgeous. It was gorgeous.”

Shavval Fleming, Grand Rapids, Michigan: “I came because I knew it was important…. What I’m going to take away from this conference is courage to teach. I’ve always felt that I didn’t want to be pushy so I would plant the seed but I wouldn’t carry it any further. Thinking that if God wants it to happen it’ll happen. But I know that I need to do more.”