Izzat Ansari gives a wave during an informal moment at a workshop session. More photographs 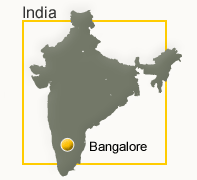 More than 1,500 friends gathered in Bangalore, 15-16 November 2008, for the regional Bahá’í conference, one of 41 called by the Universal House of Justice just four weeks ago to celebrate achievements and consider the needs of the Five Year Plan. People had traveled from all over India, with the biggest contingents coming from Karnataka, Maharashtra, and Tamil Nadu with more than 250 people each, Kerala with 170, and Andhra Pradesh with 70. Other national communities were represented as well – 50 Bahá’ís from Andamans and 21 from Sri Lanka.

The conference was held in the heart of the city. The huge building that served as the venue had a 900-seat auditorium and many smaller meeting rooms. The peripheral rooms had to be used because the number of participants was twice what had been expected.

Two members of the International Teaching Center, Ms. Uransaikhan Baatar and Dr. Ayman Rouhani, represented the House of Justice. After a spirited welcome by the National Spiritual Assembly of the Bahá’ís of India, and the reading of the message of the House of Justice to the participants, individuals and representatives of the institutions described the goal for the region of 36 intensive programs of growth by Ridván 2009. On the first day, with ongoing translations into six languages, presentations of achievements were shared from each region and country, followed by a serious and focused study of recent messages from the House of Justice.

“Over the past seven years the community has been growing in leaps. I was amazed to see people from real rural backgrounds standing on stage and addressing the audience. I can say this conference really humbled me.“

“The spirit was high,” reported one participant. “The vast majority of the people here were from the grassroots. Despite the challenging logistics, all were happy.”

In the afternoon session, 14 of the friends, mostly women and youth, shared their experiences on the central concepts of the Five Year Plan. Individuals who had experienced the transforming impact of the institute process shared how they were moved to render service and even arise as homefront pioneers. A young man who had recently moved to a promising cluster recounted how within six months he had assisted with the launch of an intensive program of growth. A children’s class coordinator from Tamil Nadu shared the learning that resulted from the managing of 100 children’s classes in one cluster.

At the end of the day, the evening’s cultural program filled the hall with drama, music, singing, and dancing performed by friends from diverse regions in India.

Bhargava of Hyderabad cluster in Andhra Pradesh recalled how, “Before the conference, I was a little depressed because I was not getting much news of the Baha’i community here. I felt the community was on a decline. But the conference proved me wrong. Over the past seven years the community has been growing in leaps. I was amazed to see people from real rural backgrounds standing on stage and addressing the audience. I can say this conference really humbled me. “

“Such tremendous response from each believer is astonishingly unbelievable. During my 30 years of Bahai life, it is for the first time that I could witness such a large gathering filled with absolute love and spirit amongst those present.”

In the morning of the second day, after a devotional which began with a colorful dance, Counsellor Latif Rasheed gave a talk full of stories and inspirational quotations as well as specific advice. He appealed to individuals to assume their role in assisting the clusters to establish programs of growth. He drew a parallel between what is happening now and what happened during the Ten Year Crusade, that we have to make a similar transformation. The challenge prepared the friends to take up their workshop groups in a serious and focused manner. As the cultural program the night before could not accommodate all the numbers, soul-stirring songs helped elevate the spirit between sessions.

At the conclusion of the conference the friends in the region had established the goal of launching 38 intensive programs of growth by Ridván 2009 or shortly thereafter. And, from among the conference participants, 150 committed themselves to lend assistance to the targeted clusters by serving as visiting tutors and traveling teachers, and 12 of the friends in the five regions in India, including a newly married couple, arose as homefront pioneers.

At the close of the gathering, Ms. Gopinath said, “I’m very much inspired by this conference, and now the believers from my cluster, Visakhapatnam, have taken the firm resolution not only to bring our cluster to the A level by Ridván 2009 but also help the neighboring clusters in their efforts to grow.”

“Such tremendous response from each believer is astonishingly unbelievable,” said Sudha Parasa of the Hyderabad cluster. “During my 30 years of Bahai life, it is for the first time that I could witness such a large gathering filled with absolute love and spirit amongst those present.”

Kala Baskaran of Hyderabad cluster, member of the State Bahai Council of Andhra Pradesh: “I’m excited to see the huge gathering of friends from grassroots levels. I’m inspired by their experiences. Definitely this conference has helped me to develop a sense of commitment towards the service to the Cause.”

A student of New Era Teacher Training Center, Panchgani, Maharashtra: “Whenever I go to teach in the villages I feel hopeless when people don't respond to the call. But this conference has given me hope and courage and I feel transformed. My life will never be the same.”

Vasanth, Kengeri cluster, Karnataka: “It was a revelation to me to learn as to how the growth of the Bahai activities and success of the plans that we make influence the society which is presently in severe turmoil.”

Niroshini Saleh, Colombo, Sri Lanka: “There are 21 friends from seven priority clusters of Sri Lanka attending this conference. It was an amazing experience to see friends from diverse cultures languages and religious backgrounds gathered here in unity. Also, studying the messages together was a truly edifying experience.”

Mitra Naimi, Mumbai, Maharashtra: “I’m thankful to the Supreme Body for organizing the conference. Now I’m more aware of my individual contribution to the success of the Five Year Plan.”

Saravanan, Kannur cluster, Kerala: “I have a much deeper understanding of the plan. I thank the friends and the two members of the International Teaching Center who have widened my vision by sharing their experiences.”

A Bahá’í from Kannur cluster, Kerala: “I come from an A cluster and this gives me the opportunity to serve in the clusters that are proposed to become A by Ridvan 2009. I have gained a lot of confidence from this conference.”

Mala Mallikarjun, Kengeri cluster, Karnataka: “This is a historic conference. I see a lot of happiness, excitement and unity among the friends.”