The Baku gathering was the last of the Asian conferences in the current series. More photographs 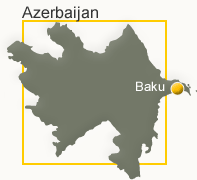 The regional conference for Azerbaijan, Georgia, and Turkmenistan drew 360 people to Baku, on the shores of the Caspian Sea, to celebrate achievements in the Baha’i work of the last two and a half years and consult about future goals.

A hotel and conference center at the seaside served as the venue for the gathering, which attracted 27 Baha’is from Turkmenistan and 47 from Georgia, along with a large contingent from Azerbaijan and a few participants from other countries.

The group from Turkmenistan arrived by ferry from across the Caspian. Realizing that the weather might play havoc with their plans, they began their trip on Monday. Indeed there were long delays, and they didn’t reach the Azerbaijani capital until Friday. Normally the trip takes 13 hours.

“This conference is like rain after an unbearable heat.”

The conference started with devotions at 9 a.m., Saturday. Participating as representatives of the Universal House of Justice were Mrs. Zenaida Ramirez and Dr. Ayman Rouhani, both members of the International Teaching Centre.

Mrs. Ramirez gave the opening address, stressing that everyone must play a part if current community-building activities are to be successful. Dr. Rouhani also addressed the gathering, focusing on the institute process and the elements of a healthy pattern of growth.

During the afternoon, 10 Baha’is shared experiences from their home communities. One of them was Carmela Nadji, who talked about participating in an institute campaign for youth of the Ashgabat cluster in Turkmenistan. She became completely engaged in the core activities, becoming a facilitator of classes for her peers and even serving as a member of the area growth committee.

“The best part was the practical steps we all plan to undertake as a result of this conference.”

For the cultural program on Saturday, a group of Baha’i youth performed folk songs and national dances, while a children’s performance featured songs celebrating achievements in the past two and a half years – an artistic complement to the reports given earlier.

On Sunday morning Delafruz Nassimova, a member of the Continental Board of Counselors, gave a presentation on current needs in the Baha’i work, particularly in terms of starting new core activities and programs of growth.  She offered an overview and then focused on priority clusters and practical ways of mobilizing available resources.

Conference participants then divided into workshops for planning activities in specific communities, and later gave presentations summarizing the results.

Dr. Rouhani addressed the gathering again, saying that the conference would change the lives of the participants now that they understood better the nature of the work before them. Mrs. Ramirez gave the closing talk, touching on the urgency of the task ahead but also reminding listeners of the glorious history of the Baha’i Faith in Azerbaijan.

Inna Tetradze, 70, Georgia: “I never imagined the effect the conference would have on me. I regret the years, days, minutes, and seconds that I wasted.”

Azer Jafarov, Azerbaijan: “The vision and knowledge I got from the conference will stimulate our activities for long time.”

Mehtieva Olga, Turkmenistan: “The conference gave us a clearer vision.”

Nizami Jafarov, Azerbaijan: “I didn’t know that salvation and establishment of the spiritual civilization depend on children’s classes and junior youth activities.”

Yuriy Jupikov, Azerbaijan: “The best part was the practical steps we all plan to undertake as a result of this conference.”

Yegana Farzaliyeva, 20, Azerbaijan: “This conference is like rain after an unbearable heat.”