With 3,500 participants, the Atlanta conference was the largest of the first 17 gatherings in the 41-conference series. More photographs 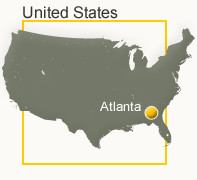 A row of friends playing African drums called to order an assemblage of 3,500 Bahá’ís gathered in the Georgia World Congress Center. Prayers were chanted with a drum background and recited to a santour accompaniment. One prayer was sung with piano, in memory of Continental Counselor Rebequa Murphy, who passed away in November.

Greeting the conference, the secretary general of the National Spiritual Assembly of the United States reminded the gathering of its purpose: to celebrate progress at the midpoint of the current Five Year Plan of Baha’i endeavor and consecrate ourselves to the activity in the years ahead – both detailed in the 20 October message of the Universal House of Justice.

One of the first reports came from the Southeastern Regional Baha’i Council of the United States, with its secretary describing how Baha’i communities throughout the region are changing in significant ways. Newly formed devotional meetings, study circles, children’s classes, and junior youth programs are cropping up, and new people are coming to those gatherings as well as to existing activities. More individuals from all walks of life are joining the Baha’i community, he said, and the rate of growth has increased by 200 percent.

Other inspiring stories came to light during the sessions:

Attending the conference as representatives of the Universal House of Justice were Mrs. Rachel Ndegwa and Mr. Stephen Birkland, both members of the International Teaching Center.

Mr. Birkland reminded the participants of a passage in the message from the House of Justice to the gathering, calling them to act, “undeflected by the turmoil and distractions of the world around you.” Mrs. Ndegwa noted that participating in Baha’i core activities is within the capacity of virtually everyone, and such activities can be initiated in practically any setting.

A full program on Saturday evening was devoted to the arts. A rousing choir of young people brought listeners to their feet and children surging forward to get closer to the action; prayers were sung in Persian, English, and Chinese; drum, violin, voice, and guitar blended on a Spanish-language number; an ode to peace in Cameroon was performed; a plaintive Persian song led into a gospel piece in praise of Baha’u’llah.

If Saturday’s sessions were about celebrating and learning, Sunday’s were about discovering what each individual could do in order to contribute to upcoming activities. Participants divided into workshops by home region – or a place they could visit to assist with the work. A number of Baha’is made commitments to serve as tutors, traveling teachers, or homefront pioneers.

At the final session, a member of the National Spiritual Assembly told the gathering that the conference had exceeded the Assembly’s highest aspirations. All weekend, she said, she had thought of another person who responded to a call from the head of the Baha’i Faith – Martha Root, who in 1919, when ‘Abdu’l-Baha’s Tablets of the Divine Plan were released, packed her bags and traveled the globe to share the message of Bahá’u’lláh.