Baha’is from Kazakhstan and five neighboring counties joined for the conference in Almaty. More photographs 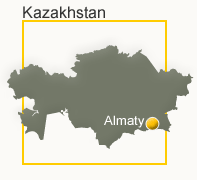 The current Baha’i conference series came to Central Asia on 6-7 December, and despite the fact that Baha’i communities in the region were recently established, 650 people from Kazakhstan, Kyrgyzstan, Tajikistan, Turkmenistan, Uzbekistan, and Western Siberia were on hand for the historic event. Most were young people, and many had joined the Baha’i community fairly recently.

All had made their way to the Mountain Sun Camp on a mountainside outside Almaty in southeastern Kazakhstan, heeding the call of the Universal House of Justice to join in celebrating achievements in community-building activities in recent years and to make plans for the next phase of activity.

“I took note of every word said during the talks. They … gave me vision of where we are moving as a world community, starting from the early days of the Faith until the present time.”

The sounds of the dombra – a fretted, long-necked lute with two strings that is popular in the region – created a beautiful atmosphere for the opening prayers, followed by the reading of a message to the conference from the Universal House of Justice and of the 20 October letter, also from the supreme body of the Baha’i Faith.

Participants heard comments by the two representatives of the House of Justice – Mrs. Zenaida Ramirez and Dr. Ayman Rouhani, both members of the International Teaching Center – and also listened to stories and reports from the various countries as well as dividing into workshops for consultation. Experiences shared by friends from the Kokshetau area of Kazakhstan and the rural cluster of Denau in Uzbekistan were among the highlights.

“I took note of every word said during the talks,” Jamal Artylova of Almaty said afterwards. “They … gave me vision of where we are moving as a world community, starting from the early days of the Faith until the present time. (Hearing about) achievements by Central Asian communities helped overcome the fears we have sometimes and gave us courage to reach for higher goals.”

The talks referred to the uniqueness of the time we live in, and articulated the global vision of current Baha’i endeavors, including some of the achievements worldwide and, as mentioned by Mrs. Ramirez, the hopes of the Universal House of Justice.

“Love filled my soul. The message calls us to arise to respond to the needs of humanity when the process of disintegration is so immense, compared to how much we have yet to build.”

The Saturday evening program offered songs, dances, and beautiful poems to uplift the spirit. (See video for an instrumental folk group from Kazakhstan.)

On Sunday, many friends, conscious of the urgency of the tasks at this moment in history, stepped forward during the planning workshops to offer to help with future endeavors.  The remarkable rate of activity in the recent past, with 14 intensive programs of growth already begun, gave the friends courage to plan for 14 more by Ridvan 2009 rather than the three that had been envisioned. This includes six in Kazakhstan, two in Russia, two in Uzbekistan, two in Turkmenistan, one in Kyrgyzstan and one in Tajikistan.  The friends from Uzbekistan and Kazakhstan showed an especially high degree of collaboration, deciding to exchange tutors and travel teachers in order to start an intensive program of growth in two bordering clusters.

One of the participants described the conference as “glorious and ground-breaking,” while another called it “an unprecedented event in the history of the region.” “A new door” of collaboration between National Spiritual Assemblies had opened, according to those present.

Alisher Jurayev, Uzbekistan: “ I would like the spirit of the conference to remain with us for a very long time.”

Kuralai Kartanbaeva, attending with Enlik Gaisina, both from Almaty, Kazakhstan: “I was told about the Baha’i Faith a year ago and now I am here!”

Hasan Jurayev, 21, Tajikistan: “(Communities) should help one another, as it was demonstrated with the examples of Kokshetau and Denau clusters.”

Alexey Ogly, 17, Novosibirsk, Russian Federation: “I am glad to have reached the conference. A week ago I didn’t think I would make it. I was ready to travel by any means…. I am grateful to God to be present and to meet so many people.”

Sepehr Taheri, Tashkent, Uzbekistan: “At this conference I learned how to find my own path of service. The 20 October letter and examples of how new believers arose to serve vigorously and with courage – all this greatly helped.”

Ukei Muratalieva. Bishkek, Kyrgystan: “The spirit of unity is felt in each element of the conference. The atmosphere invokes willingness to arise to service…. The presentations of achievements were so inspiring, and the talks of the representatives of the Universal House of Justice, too. Each word carries kindness.”

Vera Dubovskaia. Shimkent, Kazakhstan: “Love filled my soul. The message calls us to arise to respond to the needs of humanity when the process of disintegration is so immense, compared to how much we have yet to build.”

Fatima Serzhanova, Almaty, Kazakhstan: “Before this conference I felt a kind of emptiness. Now I feel complete. Ideas and concepts fell into place.”